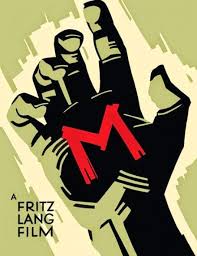 This is utterly brilliant.  Directed by Fritz Lang and written in collaboration with his wife Thea von Harbou, M is a German film, made and set in Berlin in 1931 – a city living with the constant presence of danger from a serial child killer. Based on factual records we’re asked not just who will bring him to justice but also what makes a person commit such terrible crimes?

The tension is chilling from the start; ordinary people go about their everyday lives but fear is everywhere, an unknown lurking threat.  Is it him?  Or him?  We’re a step ahead as we know who the killer is, Hans Beckert (Peter Lorre) – but, the characters on screen don’t.  So as we watch we can see the growing hysteria that turns rightful anger into a witch hunt as innocent people are held in suspicion.   But who is going to stop him?  Will it be the public or the police, growing increasingly frustrated or the criminal underworld, who decide they had better catch him as there are now too many police on the streets.

But what makes a person commit such crimes?  “The struggle of the individual against fate probably is in all my films” said Fritz Lang in 1963.  Is it our conscious or unconscious that drives us?  In M the killer is never treated as less than human.  The intense atmosphere of dread, felt from the beginning changes, because now I was feeling dread for Hans Beckert –  as the crowd are moving in, it’s one man against a lynch mob. And they don’t know if he really is the killer. We do, but still, his monologue towards the end is painfully poignant. 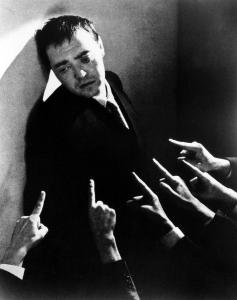 The deep shadows and contrasting of light and dark,  create a menacing and intense atmosphere throughout which (I now know!) owes much to German Expressionism, which flourished after the first world war; and would go on to influence Film Noir, Alfred Hitchcock and more recently Tim Burton.  There was also a kind of grim reality about the underworld gangs which (I also now know!) takes its influence from the German ‘Street’ films of the late 1920’s, and which I think might be a forerunner for the British New Wave cinema of the 1960’s. ‘The soul in search of itself’ could be a theme that links these three genres.

M felt incredibly modern. Not just the subject, which seemed very real thinking of all the ‘trials by press’ today; but also the story telling and pacing. It was hard to believe that this was made only 5 years after The General, and the slapstick of Charlie Chaplin and is 80 years old. It’s Fritz Langs’ first talking film.