When a signature means you’re a dead pigeon and murder smells of honeysuckle you know you’re watching classic film noir!

Released in 1944, Double Indemnity is based on the book of the same name by James M Cain, it’s directed by Billy Wilder and the screenplay is by Raymond Chandler and Billy Wilder.

Set in 1938, the story is told in a series of flashbacks by Walter Neff, (Fred MacMurray)as he speaks into a dictaphone. An insurance salesman, Neff pays a routine call on Mr. Dietrichson to let him know his policy is due for renewal. But instead of meeting Mr. Dietrichson he meets his wife Phyllis.  Barbara Stanwyck plays the quintessential femme fatale, desirable but dangerous she uses her feminine wiles to manipulate everybody, but mostly Walter Neff.

An ordinary housewife, Phyllis glides around her Californian home in costumes designed by Edith Head.   First she appears in just a towel, so we know she’s no shrinking violet, then we get billowing sleeves and power shoulder pads, enormous jewellery and an ankle bracelet.But her outfits are about more than straightforward seduction. Sometimes it’s tweed and trousers or a classic skirt and sweater, she’s choosing her clothes with great care and keeping us guessing. At 3.30 in the afternoon her gown is more champagne cocktail than ice tea, but just then, as arranged, Walter arrives and she remembers it’s her maid’s day off and her husband isn’t home after all! –  this is a dame in control, but who is she and what does she have in mind? 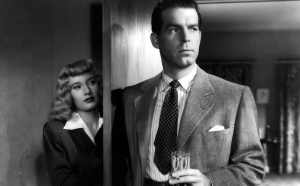 But whilst conveying a very American way of life, film noir presents us with a pessimistic view of humanity, there is a constant air of menace. All the characters are to some extent shady and the cinematography mirrors this. The high contrast between light and dark casts long shadows everywhere, from hats, blinds, corners, obscuring the characters from us and increasing the dramatic tension, so that we can never really see what they mean.  The contrast of the sunny exteriors of California to gloomy interiors gives a sense of what lies beneath the facade. The use of mirrors, high angles and deep focus shots (pioneered in Citizen Kane), that gives the background equal significance all helps to create a feeling of instability. It works like a physical representation of the plot twists, so that we are never quite sure who (if anyone) we can trust.

Double Indemnity is seen by many as the noirist of all the noirs! It ticks all the boxes for chiaroscuro lighting techniques; sharp dialogue, convoluted plot twists and a fabulously dangerous femme fatale. I’m interested that so many of the techniques associated with film noir were used by Fritz Lang in M (1931) and I see that that film is considered proto-noir! But it shows how revolutionary it was and the influence of German Expressionism on film.