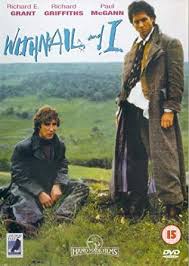 This has such a cult following, it’s always included in lists of best British films, and best comedies, it spawned a drinking game (matching Withnail drink for drink) and it’s quoted endlessly. My copy of the dvd came stuck to a Sunday newspaper as part of a ’50 films you must see’ promotion, so after years of looking at the cover I thought it was time to watch.

Written and directed by Bruce Robinson in 1987, it’s the loosely autobiographical tale of two unemployed actors sharing a squalid London flat in 1969, drowning their sorrows in booze, cigarettes and lighter fluid!. Richard E. Grant plays the flamboyant, alcoholic Withnail and Paul McGann is the contemplative I.  Fed up with their lives in London they decide to ask Withnail’s eccentric Uncle Monty (Richard Griffiths) if they can borrow his cottage in deepest Cumbria for a holiday, and so set off for the week. Joined later (and as a surprise) by the melodramatic aesthete that is Uncle Monty.

I feel a bit of a freud talking about the humour when I’ve only seen the film once and even the most hardened fans say it gets better with multiple viewings BUT being scared of those strange country folks? is Uncle Monty going to accost me in my bed?, I just didn’t really find it funny, may be even a bit embarrassing. The sweary boozing was funnier, and Richard E. Grant’s acerbic, cut glass arrogance was perfect. He’s not a likeable character but you can’t stop watching!

I much prefered the scenes that were just Withnail and I, more darkly melancholy than bittersweet perhaps; they are heading into their 30’s as the decade is about to end, and they can see their youth dyeing with the hippy dreams of the 60’s. “They’re selling hippy wigs in Woolworths, man” says Danny the drug dealer.

The closing scene is desperately beautiful, the only time we see Withnail vulnurable. Everybody has to grow up and when at the end &I gets a full time role in the theatre, it’s a bitter betrayal to Withnail.  The person he was rebelling with has gone and joined the very system they were opting out of. He’s had a sharp hair cut and doesn’t want Withnail to accompany him to the station, as if he’s already turned his back on his old way of life and is embarrassed by his wasted friend. Alone with his last bottle of ’53 Margaux (stolen from Uncle Monty) and reciting Hamlet to the wolves in London zoo, Withnail has only himself and the 1970’s to look forward too. 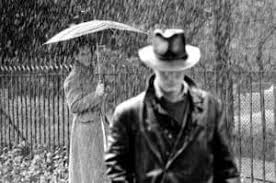