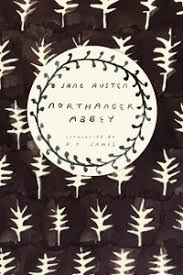 ‘No one who had ever seen Catherine Morland in her infancy, would have supposed her born to be an heroine’ from the very beginning Northanger Abbey sparkles with wit and fun. The daughter of a clergyman, never handsome and called Richard and a mother full of ‘useful plain sense’, Catherine has led a sheltered life amongst her ten siblings in an English village. So when their rich neighbours, Mr and Mrs Allen invite her to Bath for six weeks, everyone is delighted. Six weeks of discussing muslins, parading in front of the Pump Room and hopefully making new friends and falling in love!

Catherine is 17, naive and impressionable and thoroughly loveable.  Her kind-hearted character is the perfect foil with which to satirise the absurdity of ‘society’, young girls’ intense friendships and the problems of mixing up reality and make-believe!  Written for family entertainment, contemporary readers must have revelled in reading about the actual buildings they went to, the streets they walked along and the novels they read. If Dublin could be re-built from Ulysses, what an easier time the city planners of Bath would have! 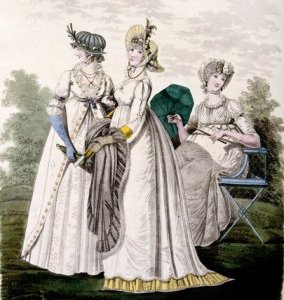 Written in 1798, four years after the publication of Ann Radcliffe’s The Mysteries of Udolpho  Jane Austen is having a lot of fun with the popular gothic novels of the time, as Catherine and her friends delight in those Horrid Tales! The heightened language parodies the nuanced prose of Udolpho hilariously, she describes the landscape around them:‘that noble hill whose beautiful verdure and hanging coppice render it so striking’ or the ‘dread’ of ‘attacks’ from unwanted callers.  Until finally Catherine’s every wish comes true and she is invited to a real Abbey. Here reality is overwhelmed by her romantic imagination as Northanger Abbey appears to be full of locked chests and mystery and the language reaches a crescendo along with Catherine’s excitement:

‘She paused a moment in breathless wonder. The wind roared down the chimney, the rain beat in torrents against the windows,. . . Catherine’s heart beat quick, but her courage did not fail her. . .Her heart fluttered,her knees trembled,and her cheeks grew pale.’

But I didn’t sense any malicious criticism, it all just skips along.  I thought Jane Austen

really liked her young heroine and was enjoying the youth and ridiculous over romanticising of everything. At a time when essays and poetry were the acceptable reading material, the authors voice intervenes to stand up for the novel

‘Oh! It is only a novel!. . . or,in short, only some work in which the greatest powers of the mind are displayed, in which the most thorough understanding knowledge of human nature, the happiest delineation of its varieties, the liveliest effusions of wit and humour are conveyed to the world. . . ‘

I think she’s making a bold claim for novelists of all genres.

A more caustic wit is used for the absurdity and greed of adult society.  General Tilney is a truly horrible character, everybit as menacing as Radcliffe’s Montoni, with his leering and secrecy and is best summed up with this wonderfully measured line

‘never had the general loved his daughter so well in all her hours of companionship,utility and patient endurance as when he first hailed her Your Ladyship’.

Northanger Abbey isn’t a great passion like Pride and Prejudice but it was so much fun, tripping around Bath with Catherine and Isabella and Eleanor and the inevitable happy ending. The line that summed it up for me described Catherine as she came home from the ball after meeting Henry for the first time – who cannot delight in her fortune when

‘her spirits danced within her, as she danced in her chair all the way home.’ 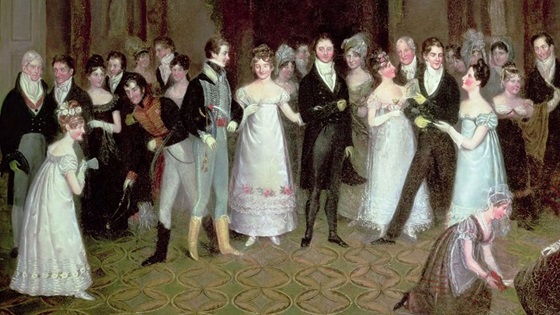 I read Northanger Abbey as my ‘Novel by a Women Author’ in the Back to the Classics Challenge.