The first part of my reading year has been spent in the throws of romance, Emilie and Valencourt in Udolpho, Catherine and Henry in Northanger Abbey, Lucie and Charles in A Tale of Two Cities. So to pick up this brash and brittle story of infidelity and divorce was a bit of a culture shock!

‘I always thought during the pain of the marriage that one day it would make a funny book.’ A life lesson that Norah Ephron learnt from her mother was that everything is potential copy. Heartburn is a savagely comic roman-à-clef about the breakdown of a marriage. With recipes.

Rachel, a successful cookery book writer is 7 months pregnant with her second child when she finds out that her husband Mark is having an affair with Thelma, a family friend that she doesn’t like. Written and published in 1983, this has a very ‘New York’ feel to it. It’s full of snappy prose and one liners that reminded me of Billie Crystal in When Harry Met Sally but without any of the sweetness. Conversations between family and friends and therapy groups are sharp and witty and there’s lots of domestic detail that makes it relatable. And it is funny but bitter, as I suppose it would be.

‘The next morning, I flew back to Washington. I felt better; at least someone wanted to be married to me. it wasn’t the person I was married to, but it was better than nothing. I took a cab home. Maybe he’s missed me, I thought as we came around the corner. Maybe he’s come to his senses. Maybe he’s remembered he loves me. Maybe he’s full of remorse. There was a police car parked in front of the house. Maybe he’s dead, I thought. That wouldn’t solve everything, but it would solve a few things. He wasn’t,of course. They never are. When you want them to die, they never do.’

It’s not that I don’t still love Norah Ephron, I do and at another time I can see myself really enjoying this but it just wasn’t the right book this time. 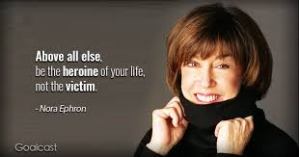