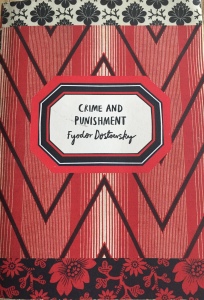 So to book three in my introduction to Russian literature, and what a difference! Where War and Peace and Doctor Zhivago were huge in scale, the vast landscape and different peoples, this was confined to the backstreets of Petersburg, the canals, alleyways and squares. It felt dark and squalid and cramped, but filled with huge characters, coincidences, chance meetings and overheard secrets.

The crime came quickly and was brutal and horrifying in its description. Raskolnikov plots and contemplates the murder almost from the first page. Arrogant and miserable, he condescendingly calculates that an ugly old business women is of no value, that he is above the law and this justifies his actions. So why was I rooting for him in his dramatic escape from the murder scene, and kept rooting for him as the police inspector started to close in?

It can only be because we’re allowed so deeply into his consciousness, even before he commits the crime we see him racked with confusion and disgust

“Could such horror really come into my head? But then, what filth my heart is capable of!. . . Above all, filthy, nasty, vile, vile!

Raskolnikow dreams of greatness, identifies himself with great figures, he’s contemptuous of society and its stupidity and ugliness but this just leads to a sordid crime that he cannot rationalise and so taunts himself bitterly with the shame and remorse that he feels. His capacity for such an evil act is at odds with his feelings for the injustice in the world, so that through his intense anguished emotions we know there is always the possibility of redemption.

What I found surprising with such a tormented soul at its centre was that Crime and Punishment wasn’t a heavy read. There’s a whole mix of social, moral and political commentary told through a cast of huge often theatrical characters. And there’s an undercurrent of humour that runs very close to the surface that works to heighten the drama; although I don’t think it’s ever focused on Raskolnikov, which serves to amplify his story and paranoia. The funeral feast for Marmeladov is overshadowed by the petty snobberies of the guest list and seating plan, and dissolves into farce.

‘I asked her, as a decent women, to invite the better sort of people-namely, my late husband’s acquaintances-and look who she’s brought!Clowns!Sluts!Look at that one with the pimply face: some sort of snot on two legs!’

Even Svidrigailov, a really sleazy piece of work, smarmy and spiteful as he preys on young girls, is treated more contemptuously by giving him lines that make us laugh at him, for example when he’s shot:

‘He stopped and laughed softly:
“The wasp has stung! She aims straight at the head . . . What’s this? Blood?”‘

There were many times when the tone in the writing changed, which didn’t 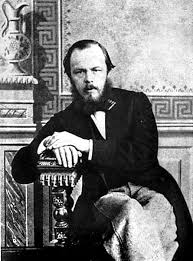 just keep individuals and their story arcs clear but also kept such a long book fresh!

Svidrigailov ends in a closet with faded yellow wallpaper, so small he can hardly fit in, a reflection of Raskolnikovs’ and although he has some bad dreams he also dreams of an English cottage garden and

‘he noticed especially the bouquets of white and tender narcissus, in jars of water on the window sills, bending on long, bright green, fleshy stems, with their heavy, sweet scent.’

There doesn’t seem to be any sense of shame, he’s consumed in his own evil, there’s no ‘movement in his soul’ as Richard Pevear puts it in the introduction, and that’s the big difference between him and Raskolnikov and why only one of them can end with hope.

15 thoughts on “Crime and Punishment”