Social reformer, poet and writer Edward Carpenter was a pioneering supporter of womens rights and an early campaigner for gay rights. Strongly influenced by Walt Whitman, his home which he shared with his life long partner George Merrill became an informal refuge and is where E.M. Forster was inspired to write Maurice. END_OF_DOCUMENT_TOKEN_TO_BE_REPLACED

Based on Tove Jansson’s own summers in the cottage she built with her brother Lars on a tiny island they discovered  in the gulf of Finland in 1947; The Summer Book follows a companionable summer shared between 6 year old Sophia and her grandmother, characters inspired by her own artist mother, Signe Hammarsten and her niece Sophia.

In the introduction Esther Freud describes how on a visit it takes her precisely 4½ minutes to walk around the island, but after being there for a couple of days she falls into ‘island time’ and realises ‘it would need a whole summer to discover everything there is to do’.  And I felt that this was true of the reading. The short chapters with titles like ‘The Neighbour’ or ‘The Pasture’ or ‘Playing Venice’ entice you to slow down, don’t rush and dip into the adventures and conversations that Sophia and her grandmother are having, reading and absorbing in island time. END_OF_DOCUMENT_TOKEN_TO_BE_REPLACED

‘Amory wondered how people could fail to notice that he was a boy marked for glory, and when faces of the throng turned towards him and ambiguous eyes stared into his, he assumed the most romantic of expressions and walked on the air cushions that lie on the asphalts of fortune.’ END_OF_DOCUMENT_TOKEN_TO_BE_REPLACED 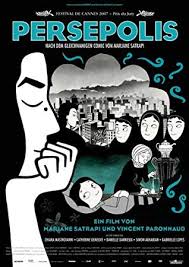 Written and directed by Marjane Satrapi in collaboration with Vincent Paronnaud, Persepolis is based on Satrapi’s autobiographical graphic novel of the same name. I must admit that although this has been on my radar for a few years I’ve always been put off by the animation, so I’m glad I’ve been made to watch it for my film challenge because it was brilliant.

A coming of age story set against the background of the Iranian Revolution, it’s both harrowing and exuberant. Marjane is 9 when the film opens in 1978, a precocious child who wants to be a prophet and obsesses over Bruce Lee.  Growing up in comfort with her liberal, politically active family they have high hopes for a better society post the revolution. END_OF_DOCUMENT_TOKEN_TO_BE_REPLACED