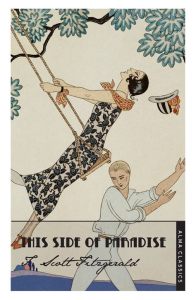 ‘Amory wondered how people could fail to notice that he was a boy marked for glory, and when faces of the throng turned towards him and ambiguous eyes stared into his, he assumed the most romantic of expressions and walked on the air cushions that lie on the asphalts of fortune.’

He’s conceited and arrogant and desperately lonely and unhappy, but he reads voraciously and I really enjoyed the way his life is chronicled by his reading; Dickens when ‘he thought he really should read better stuff’ or especially in times of depression when he delves into ‘the misty side streets of literature’! Anyway all these years are dealt with in the first chapter and in the second he arrives at Princeton. All alone with no reputation to hinder him he makes a group of friends through a shared love of literature. They read, write, proclaim poetry and discuss: Shaw, Wilde, Swinburne, Chesterton, Yeats – his ideas are in tune with life, he’s in love and he’s happy.

But change is coming for them all. In his final year college days are punctuated with drill practice that slowly rubs away the basketball lines, as they prepare to be sent to France. Discussions about Germany and the Bolshevik revolution are heightened by their reading and understanding of Tolstoy and Whitman while their passionate following of Rupert Brooke leads to talk of heroic death as well as pacifism. Amongst their shaggy haired, left wing heroes is the poet and activist Edward Carpenter, who is one of my own so I was both amazed and delighted!

Part 2 opens after the war with a (I thought very funny) Noel Cowardesque drama ‘The Debutante’. Rosalind, the sister of one of Amory’s friends is preparing for her coming out ball. It’s old school and old money. For Amory now an aspiring writer, a desperate sense of disillusion sets in, his money has gone, the love of his life has left him for the security of old school money (just as Daisy Miller left Jay Gatsby for Tom Buchanan) and friends have died in the war or disappeared into another life, even his admiration for Rupert Brooke, ‘just a dead Englishman’ has gone. It’s June 1919 he feels restless and uneasy and sees this restlessness reflected in his generation, where were they to find their heroes? ‘he rather longed for death to roll over his generation’. So he goes on a complete bender only stopped by the ‘thirsty-first’ of prohibition.

Monsignor Darcy, a friend of his mother, has been his mentor throughout, and he turns to him for help, but instead meets Eleanor who after a too wild winter of excess

in Baltimore has been sent to her Grandfather in Maryland. She is a mirror image of Amory, full of poetry and discontent . Unlike Rosalind she questions the stupidity and waste of her life when she isn’t allowed to do anything ‘here am I with the brains to do everything, yet tied to the sinking ship of future matrimony’. Well we don’t find out what happens to Eleanor but I hope she goes off and does something majestic. For Amory it’s the beginning of his salvation as he works through his disillusion. He realises that the most important thing he has been given by Monsignor Darcy and his friends is security and this is what he wants to be able to provide for others. But first we need to question the status quo, as long as we accept without question, nothing will change.

His ideas are still in a riot but ‘I know myself’ he cries ‘but that is all’, he doesn’t know where he’s going with his life but it’s full of hope.

25 thoughts on “This Side Of Paradise”