Social reformer, poet and writer Edward Carpenter was a pioneering supporter of womens rights and an early campaigner for gay rights. Strongly influenced by Walt Whitman, his home which he shared with his life long partner George Merrill became an informal refuge and is where E.M. Forster was inspired to write Maurice.

A market gardener he railed against pollution and helped to coin the phrase ‘the simple life’. After visiting India he became a passionate advocate for sandals, he made his own and in this photograph taken in 1905 by Alfred Mattinson, I think rocks the socks and sandals look! 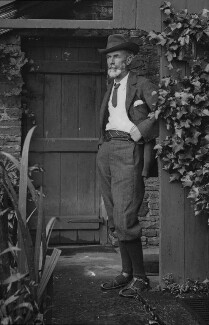 I discovered Edward Carpenter through reading about his friend and fellow Fabian Olive Schreiner and not long afterwards saw this painting by Roger Fry at the National Portrait Gallery in London.

Painted in oils in 1894 Fry has painted his close friend in his ‘anarchist overcoat’.