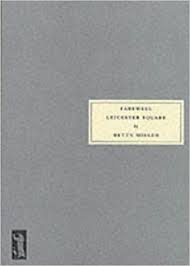 Quite by chance the book I read for my TBR challenge and the film I watched for my TBW challenge shared a subject – cinema. Farewell Leicester Square, written by Betty Miller in 1935 and Cinema Paradiso directed by Giuseppe Tornatore in 1988, are both about young boys growing up in the early days of cinema and desperate to be a part of it. They both leave their home towns, only to return years later, as successful directors, when they hear about the death of a loved one. So I thought they could share a post!

Farewell Leicester Square really tackles head on what it means to be an outsider.  Alec Berman grows up in a Jewish family in Brighton, England, where instead of joining the family tobacconist business he dreams of the cinema. Over the years he becomes a successful film director, marries and settles down. But he never feels that he belongs even amongst the liberal, creative world he is a part of. When I’m so used to reading novels from the 30’s and excusing the casual racism as ‘of the time’, this was a startling rejoinder:
“A sudden familiar shock went through him.  The careless contempt in that expression. . . Me, she means. Dago: Jew: Outsider. . . He could anticipate the scene. her sudden violent flush. Oh, I’m so sorry, I didn’t mean – And then the usual smoothing over. Of course, you’re different. Or else: Some of my best friends are Jews . . . They always said that. And one was supposed to be humbly grateful. . . ”
The more he feels alienated the more he pushes everyone away, to some extent the reader as well.  This doesn’t make him an easy character, but I thought it worked well because I had to try harder to see things from his perspective.  Betty Miller, herself the daughter of a Lithuanian Jewish businessman, doesn’t let us off lightly and the talk of refugees in Europe felt very contemporary.

But it’s also a very filmic book, scenes are described so visually that whenever I read about Alec’s wife Catherine, who strides about in ancient but very well cut tweed pushing back her red hair, I couldn’t help imagining Deborah Kerr! Or Alec meeting Catherine in the rain:

“He wore a dark overcoat, a silk muffler and black Homburg hat. . . .He shot his wrist out of his sleeve: ten to eight. She was late.”
It could be Humphrey Bogart and we could be with a Raymond Chandler script!

Written and directed by Giuseppe Tornatore, Cinema Paradiso is just lovely.  A filmmaker recalls his childhood and his love of the cinema in his village and his deep friendship with the projectionist Alfredo (Phillippe Noiret).

Salvatore is looking back to the cinema of the 30’s and 40’s, the same era that Alec Berman would have been working in. It’s not so much about film as the actual, physical cinema going experience. Set and filmed in Tornatore’s home town in Sicily, the projectionist and the cinema have a personal relationship with the audience, who laugh and cry, shout and eat and much more! It’s a nostalgic trip looking back at the dying trade of traditional film making, editing and screening at a time when the impersonal multiplexes were taking over.

Farewell Leicester Square and Cinema Paradiso both feature our protagonists returning home after long absences as successful directors.  This is so well described by Betty Miller that Alec’s home coming is as visual as Salvatore’s.  Everything is smaller – Alec can’t believe that he could swing down the stairs into this tiny hall! But both men despite their success have an emptiness about them which I only really understood with Alec. 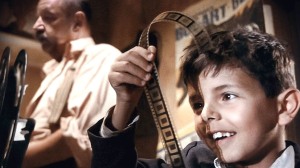